What foods to avoid if you have migraines?

This week is Migraine Awareness Week, a time to find a better understanding and delve deeper into a condition which affects up to 1 in 7 Brits.

As we’ve explored previously, 90% of migraine sufferers admitted that they’ve had to take time off work because of their migraines, with a staggering 25% of sufferers revealing that they’ve been forced to take over 15 days (the equivalent of 3 working weeks) off. What a headache.

So, what exactly is a migraine, how do we know if we’re having one, and what are the triggers we should look out for? Migraines usually present as a throbbing headache felt specifically on one side of the head that can go on to encompass both face and neck, lasting anywhere from 4 hours to 3 days.

While varying depending on the severity or type, these are the common symptoms of migraines:

What can trigger a migraine?

Triggers of migraines are varied and can include anything from bright lights and loud noises, food and drink, tiredness, or stress. Women can be especially at risk if they are undertaking Hormone Replacement Therapy or taking the combined contraceptive pill – this is because changing oestrogen levels may trigger headaches or migraines.

Why does food cause headaches?

Studies show that our diets can have a huge effect on whether or not we are vulnerable to migraines. Hypoglycemia, or low blood sugar caused by fasting, eating poorly, or eating trigger foods, is one cause for migraines to occur.

Despite this, there is no specific one-size-fits-all diet to help relieve symptoms. Elimination diets, which involve cutting out one trigger food at a time, are often inaccurate and involve a long and arduous process to find trigger foods that can cause many to give up or lose interest. A food intolerance† test, however, can be a simple solution.

Madhu Sohanpal had been suffering from debilitating migraines since the early 1990s. “My migraines soon turned into vertigo and I had an irritated stomach. I was also constantly tired and drained. I have children and it made it difficult for me to keep up with their activities,” explains Madhu.

YorkTest offers a fast track elimination diet by analysing IgG reactions to up to 208 food and drink ingredients. The Food&DrinkScan Premium programme, which involves sending a finger prick sample to the company’s laboratories, revealed that Madhu had reactions to cow’s milk, eggs, yeast and anise seed with borderline reactions to white grape, red grape, wheat and salmon.

After eliminating her trigger foods with help from two consultations with a registered Nutritional Therapist, she noticed a significant improvement to her health over the following weeks. “My headaches reduced, and my vertigo disappeared,” she said.

62-year-old, Jane-Dora Fraser has suffered with severe ME, intense headaches and nausea for over 25 years. Again, YorkTest’s Food&DrinkScan Premium programme, revealed that Jane-Dora did indeed have food intolerances – cow’s milk and chilli pepper.

“Within days, my nausea and headaches had stopped almost completely. I no longer buy products made with cow’s milk, i.e. cream cheese, milky ready meals, rice pudding, which I loved, and it has continued to make a difference”.

For those with migraines or debilitating headaches, understanding your own personal food and drink intolerances could really make a difference.

What foods to avoid if you have migraines?

As we’ve seen in certain individuals, migraine symptoms can be aggravated by diet. Thought to be one of the leading causes of migraines, tyramine is an amino acid that is found often in chocolate, aged cheeses, dried or fermented meats and fish, broad beans, nuts, wine, and other fermented foods.

An over-excess of tyramine stimulates the release of the neurotransmitter norepinephrine, and may also cause certain receptors to be activated, which in turn could induce head pain. If you’re prone to migraines, eating foods containing tyramine should be monitored.

Other possible dietary triggers of migraines include:

Another common dietary trigger is thought to be Monosodium Glutamate, or MSG. MSG is most commonly known for being used in Chinese cooking or in Chinese restaurants for extra flavour. There’s speculation that MSG can cause a reaction in the brain that can result in the dilation of blood vessels around the skull, leading to headaches and migraines.

Yet despite these common causes, it’s essential to recognise that everyone of us has a unique reaction to food and drink. It may be that your migraines are the result of an intolerance you are unaware of, which is why it could be beneficial to commit to a food intolerance† test as it can give you a tailored list of your personal triggers.

One survey in particular was carried out with 5286 people reporting a wide range of chronic symptoms, who had taken the YorkTest – or to give it its scientific name – a food-specific IgG enzyme-linked immunosorbent assay (ELISA) blood test.

Questionnaires were analysed by the University of York to investigate the benefits experienced by following the elimination diet recommended by the YorkTest programme.

Does coffee cause migraines?Read More

† The YorkTest define food intolerance as a food-specific IgG reaction.

Our information is intended to provide nutritional advice for dietary optimisation. YorkTest do not claim to treat or cure symptoms and recommend that you discuss any medical concerns you have with a GP before undertaking a YorkTest programme.

Remove the uncertainty and take the COVID-19 IgG Antibody Test to show whether you have been exposed to the coronavirus. 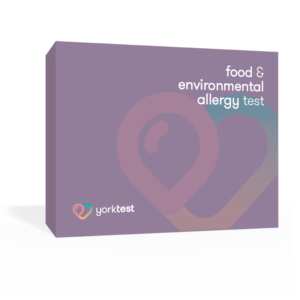 Be a healthier and happier couple

Take our most comprehensive couples food and drink intolerance test to find out whether you and your partner have a food intolerance. Five Free-From Brands You Need To Try In 2020