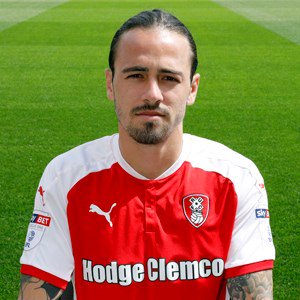 For as long as he could remember, Rotherham United midfielder, Ryan Williams, had experienced bloating and wind. This occurred frequently, especially in the late evening before he went to bed.

Despite considering these symptoms “normal” for him, he was interested in alleviating them in order to see if he could “get a 1% performance increase” on the pitch. As he suspected that food was behind these problems, changing his diet was the first port of call.

The first thing Ryan tried was eliminating certain ingredients one by one to see if this would identify the offending food. One of the things he tried was switching the type of cereal he ate on a morning. However, this did not lead to any improvements.

The breakthrough came when he discovered YorkTest’s services. A YorkTest food intolerance* test analyses a person’s IgG reactions for over 200 food and drinks ingredients, identifying their personal “trigger foods”.  Food intolerance* has been associated with a wide range of disruptive symptoms such as, IBS, eczema and bloating

In addition to the testing process, those who follow a YorkTest programme also receive comprehensive support, including a consultation with a registered nutritional therapist to guide them through their elimination diet.

Ryan’s test revealed an intolerance to cow’s milk, which came as a surprise. He usually drunk at least 500ml of milk each day so eliminating this was a significant change to make to his diet. With the help of a YorkTest nutritionist though, he switched cow’s milk for soya and also learnt what other foods, containing milk, he needed to avoid.

As well as being a key ingredient in foods such as cheese, yoghurt and ice cream, cow’s milk is also hidden in many other foods. Many people are unaware that traces of it can also be found in certain breads, biscuits, cakes and processed meats.

Within two weeks of following his new diet, Ryan noted that he felt better. He also lost 1.5kg of weight in that period.

“The main feeling was I felt a lot lighter and healthier,” said Ryan.

Better still, several months later Ryan was able to reintroduce cow’s milk to his diet, without the bloating or wind returning. A subsequent retest confirmed that his body was no longer reacting to the ingredient. He still drinks soya milk but now also enjoys the occasional ice cream.

“I feel like a better version of myself,” Ryan concluded.